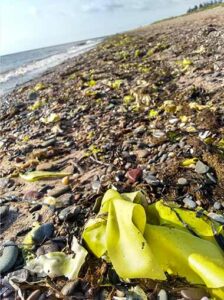 Back in 2017, I had been passing through New Brunswick to visit my cousin in Nova Scotia. I stayed overnight in Tracadie-Sheila. Early next morning I drove to nearby Val Comeau beach on the advice of the hostess where I was staying. I got to greet the sunrise. I was enthralled. The quiet dawn of the sun and the ocean lapping gently brought me a sense of peace. I walked the length of the beach without a soul around.  I got to beachcomb amidst the shells and rocks galore! It was late September so I didn’t swim, but I waded into the water as far as I dared. Gloriously cold!

In the distance the beach extended out to a point and then there was a knoll of spruce protruding from it.  It was like seeing Tow Hill at the far end of the beach on the Queen Charlotte Islands back in the 1970s. We had moved there because my father was in the Canadian Armed Forces and had been stationed in Masset. There, I used to walk Cemetery beach with my family so often. We would  beachcomb,  looking for prized agates. As little boys, we would constantly be running back to ask my father if we had found one.

It was bliss at the beach that morning.

The pull to stay was very strong. I didn’t want to part. I stowed away my collection of rocks and shells protectively in the back of the car. Took a last look at the panorama. Said goodbye. Promised to return. Stored the memory carefully. Little did I know that two years later I would be moving from Ontario to make a new home in New Brunswick. I would visit this beach again. 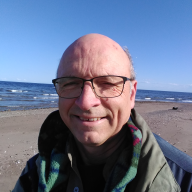